CONTEMPORARY ART FROM THE FORMER SOVIET UNION AND OTHER MYTHICAL PLACES

Limited capacity, please RSVP to: isabel@momentumworldwide.org
Meeting at the Kassa 10min before, tours start sharp on the hour.

No additional charge (only entry-fee is charged).
Group discount of 20% for groups of 10p+.

Balagan!!! is a popular and much used exclamation in contemporary Russian art that describes, with celebratory gusto, a farce, a fine mess, the most unholy of cock-ups – but it is also the title of a major exhibition curated by David Elliott in Berlin, Dresden and Hamburg, for MOMENTUM and the NORDWIND Festival 2015, of the contemporary art of the former USSR and its former allies.

The exhibition includes over 150 artworks by 75 artists from 14 countries from the former ‘East’ that all have one thing in common: the artists’ struggle to digest what they have experienced, and their attempt to reconcile this with their desire for a new, hopefully better, life and art. Yet this exhibition also reveals a world where chaos and misrule, along with the social comedy that results from it, are scathingly exposed.

In 1999, when Elliott was Director of Moderna Museet, he conceived the exhibition AFTER THE WALL. Art and Culture in post-Communist Europe – also shown in the Ludwig Museum, Budapest and the Hamburger Bahnhof/Max Liebermann Haus in Berlin – its idea was to ‘measure’ cultural change by showing, for the first time together, the generation of artists that had emerged in the decade after the fall of the Berlin Wall. Now, twenty-five years after this momentous event, the world revealed in BALAGAN!!! seems more restrictive with less hope. Poverty is still a huge problem, nationalisms are again resurgent, ethnic and religious conflicts of many kinds bubble under the surface, and popular cynicism regarding politics is rife…. Yet, unacknowledged by the West, the autonomy, integrity and talent of many contemporary artists from this region is unimpaired.

In Berlin the exhibition will take place in three different venues: the museum spaces of the Max Liebermann Haus next to the Brandenburg Gate, the rough industrial interiors of Kühlhaus, a former refrigeration plant on Gleisdreieck, and in MOMENTUM, part of the Bethanien Art District in Kreuzberg. A lecture, symposium and performance programme will be organised in co-operation with The Institute for Cultural Inquiry (ICI), the Stiftung Brandenburger Tor and the Hamburger Bahnhof. During the time of the exhibition, works by some artists in it will also be shown at Hellerau, Dresden and Kampnagel, Hamburg.

THE STORY OF BALAGAN
The story of BALAGAN is strongly embedded within all the arts, particularly in the commedia dell’arte that underwent a revival in Russia immediately before and after the Revolution. The Russian word Balagan originally meant ‘fairground’, or the lightly constructed booths that characterised them. By the 18th century it had become associated with the activities of the people who worked there: puppeteers, clowns and jesters who made fun of and satirised established order.

In 1906, writer and poet Aleksandr Blok (1880-1921) finished his play Balaganshchik (variously trans- lated as The Fairground Booth or The Puppet Show), the St. Petersburg première of which was directed by the avant-garde theatre director and actor Vsevolod Meyerhold (1874-1940), who also played Pierrot, its lead role. The riotous events of its opening night proved to be the first salvo in a continuing volley of theatrical coups that lasted until the repression of the early 1930s. Ostensibly, Blok’s intent in presenting such a dysfunctional masquerade to the public was to explode the social pretensions of Realist and Symbolist the- atre by exposing its melodramatic clichés yet, in doing this, he also expressed the pain and drama of his times as well as that of his own experiences and relationships.

Outside the fairground, BALAGAN also appeared in the coruscating satires of Nikolai Gogol (1809-1852), the brooding, driven characterisations of Fyodor Dostoevsky (1821-1881), the épatage of the Futurists and, after the revolution, in the theatre of the Proletcult and Blue Blouses as well as in the absurdist performances and writings of Daniil Kharms (1905-1942) and the OBERIU (Union of Real Art) collective. In cinema, too, BALAGAN ran riot: in the ‘eccentrizm’ of Grigori Kozintsev (1905-1973) and Leonid Trauberg (1902-1990), in Glumov’s Diary (1923) Sergei Eisenstein’s (1898-1948) first short, and in Vsevolod Pudovkin’s (1893-1953) flirtation with Hollywood slapstick comedy.

During the dark years of Stalinist repression BALAGAN flourished both above and under- ground. A crazy, misplaced sense of carnival pervades Aleksandr Medvedkin’s (1900-1989) films in the 1930s and may also be perceived in the kabuki-style acting, mask-like characterisations and random use of colour in Sergei Eisenstein’s last film Ivan the Terrible Part II (1945, released 1958). The fear, chaos and misrule that typify this time govern the plot of Mikhail Bulgakov’s (1891-1940) classic novel The Master and Margarita (begun in 1928 and finally published in 1966) and, while Europe was again being again torn apart by war, Mikhail Bakhtin (1895-1975) completed his critical study Rabelais and the Folk Culture of the Middle Ages and Renaissance (not published until the 1960s). In this, the inverted, allegorical world of carnival was seen as a safety valve as well as vision of a better life. Dichotomies – such as spirit and body, ‘high’ and ‘low’, rich and poor, private and public, sacred and profane, powerful and weak – were no longer tools of dialectics but revealed as methods of social control. The grotesque realism of Rabelais’ masterwork became a metaphor for absolute power overthrown – a subversive fantasy that the reader could clearly relate to the present.

In the face of such oppression, sardonic laughter was a release – an uncontrollable, therapeutic, liberating force, sometimes expressed publicly but fertilized by the desperate black humour of the GULAG. After Stalin’s death, this laughter echoed aloud in the ‘dissident’ satirical writings of Andrei Sinyavsky (1925-1997) and Yuli Daniel (1925-1988) who, in 1966, were both put on trial and convicted for ‘anti-Soviet agitation and propaganda’. From the early 1970s, it could still be discerned in the visual ironies of such ‘Sots Artists’ (an ironical abbreviation of Socialist Realism) as Vitaly Komar (b. 1943) and Alexander Melamid (b. 1945) or in the ‘child-like’ paintings, albums and installations of Ilya Kabakov (b. 1933) and many others….

The creative fusion between the political, social and the personal has continued as an impetus for BALAGAN from the perestroika of the late 1980s until today. But although the appreciation of it may have reached its most developed form in Russia and the former East, as a phenomenon it is universal. The revolutionary politics of laughter, as well as the cathartic release it promises, are important, but this kind of humour has always been engendered by a sense of outrage at the abuse of human rights and values that is far from amusing. This fragile, vulnerable condition that touches upon us all is expressed in the BALAGAN of contemporary art everywhere. 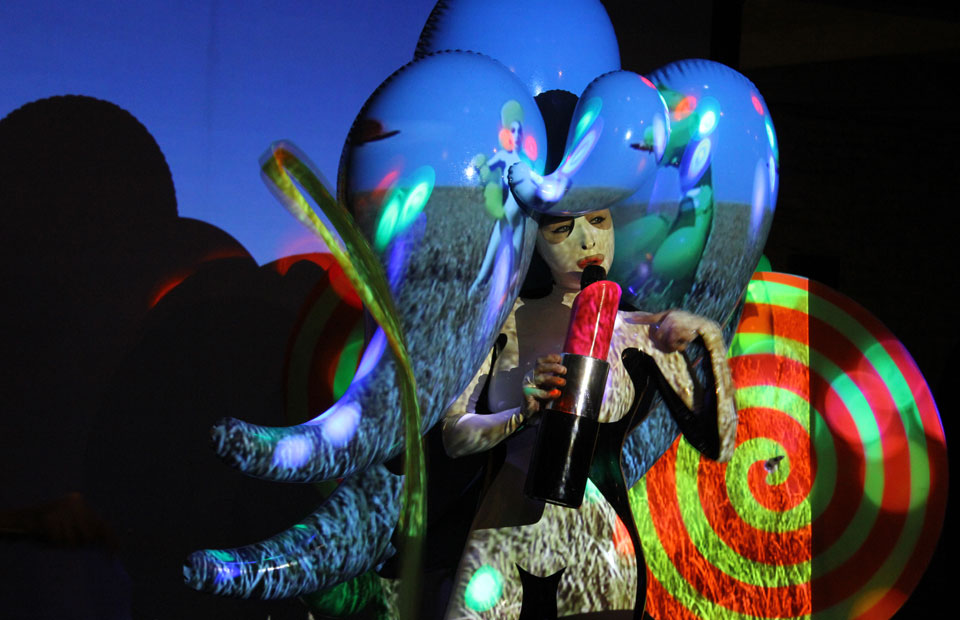 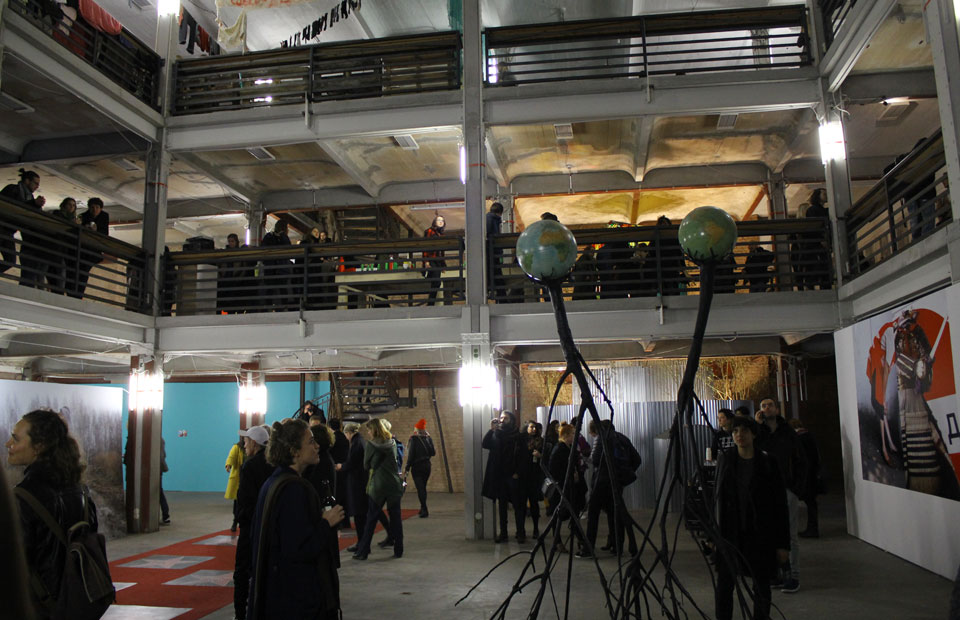 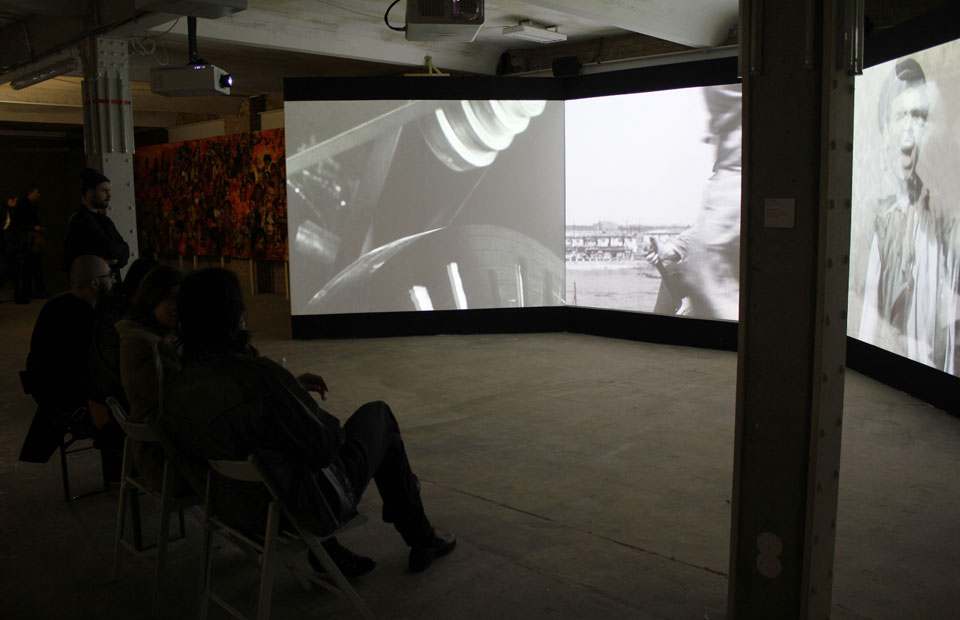