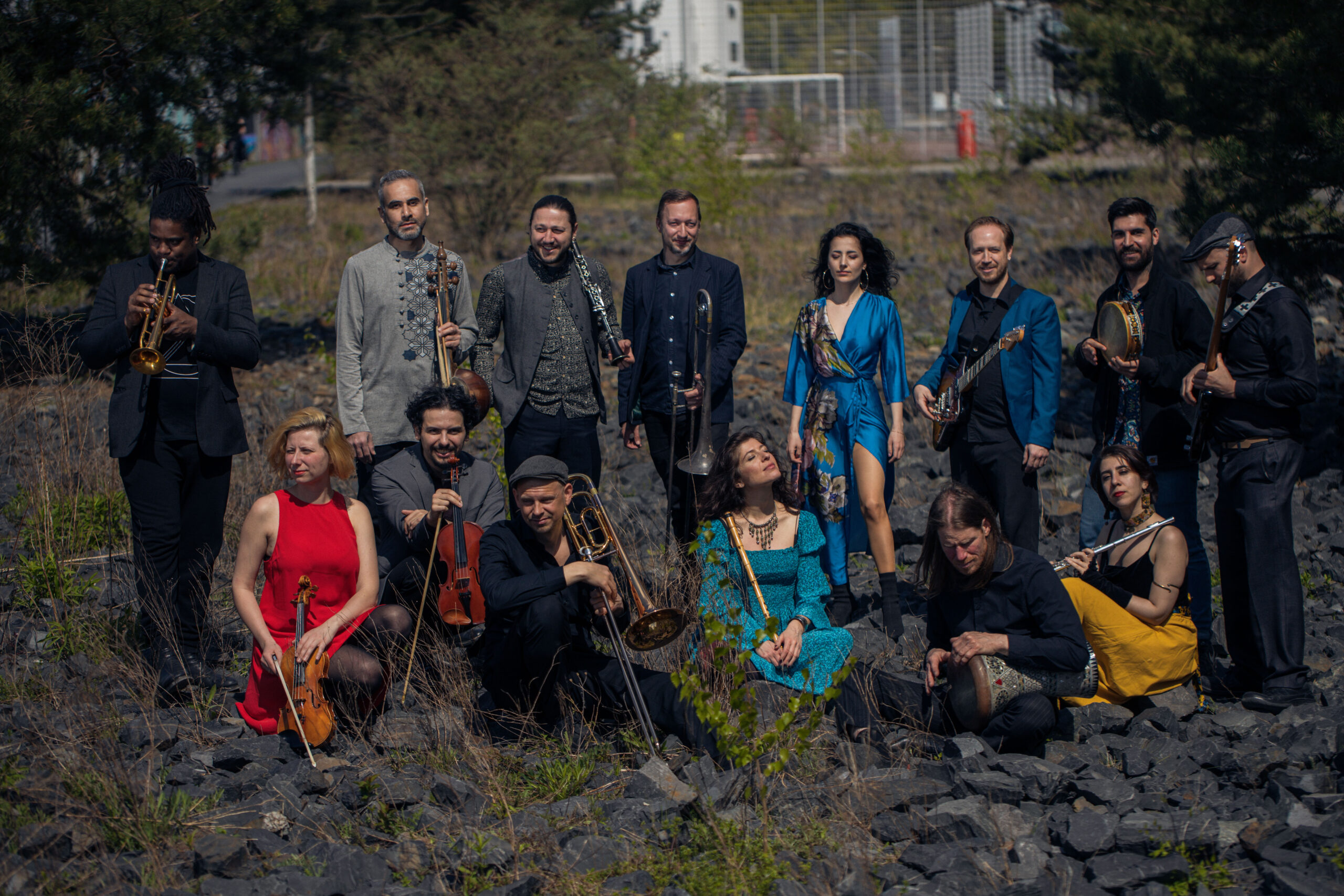 ENG:
NEW BABYLONIA – feat. Layale Chaker, Kinan Azmeh, Naghib Shanbehzadeh and Sanaz Sotoudeh
With the well-known Syrian clarinetist Kinan Azmeh, the Lebanese violinist and composer Layale Chaker and the Iranian pianist Sanaz Sotoudeh, the quintet of the Babylon ORCHESTRA will explore the music from the countries of the Babylonian Empire – today this area includes not only countries such as Iran and Iraq, but also Syria and as far as Lebanon or Armenia. Original compositions that take up traditional elements of these cultures in fresh modern form and improvisations between the musicians from Iran, Europe and Asia will give an impression of the current cultural diversity of the Near East through this special encounter.
Kinan Azmeh – clarinet – www.kinanazmeh.com
Layale Chaker – violin – https://layalechaker.com/home
Sanaz Sotoudeh – piano https://www.sanazsotoudeh.com/
Naghib Shanbehzadeh – percussion https://www.youtube.com/watch?v=ZaABcXVpnlM
Mischa Tangian – violin
Kundri Lu Emma Schäfer – viola
Martin Knörzer – cello
Valentin Link – double bass/Moog Synth 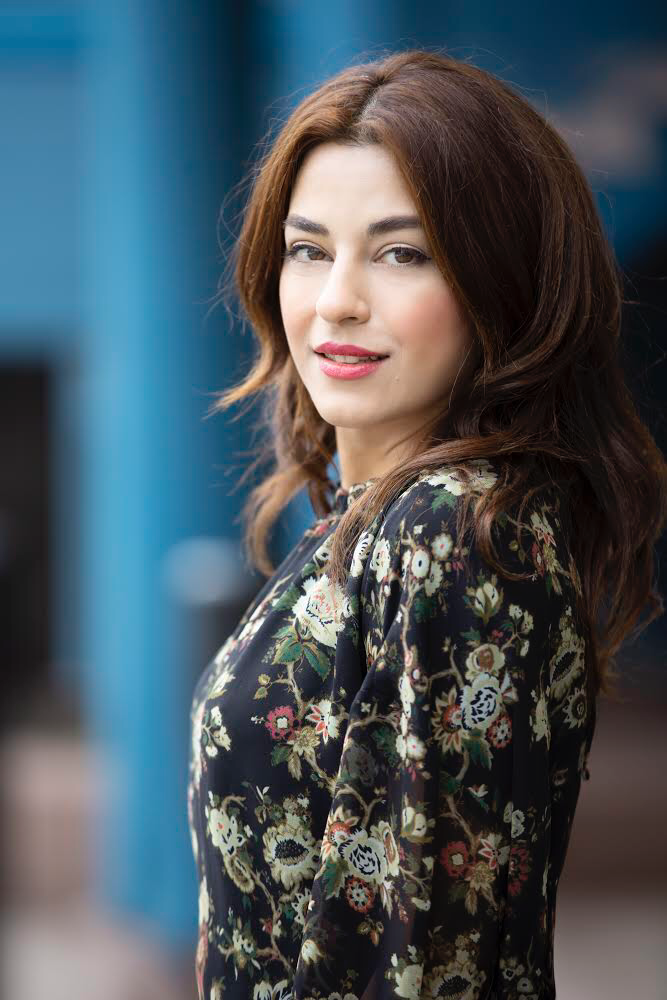 “Sanaz Sotoudeh at the piano making light of the fiendishly difficult piano parts. Her playing throughout was sensitive to the extraordinary range of emotions of these works, combining confidence and astute pianism” Musical Pointers (London, UK, 2011)

Pianist Sanaz Sotoudeh has appeared in recitals at various venues and festivals around Europe, North America and Middle-East. As a versatile pianist in both solo and collaborative repertoire she has been performing and collaborating with well-known musicians, artists and orchestras around the world; as well as live performances and interview on BBC Radio 3 in UK, on Okarina Musique TV in France, Boiler Room TV in UK, and on Abu Dhabi TV in UAE.

Sanaz Sotoudeh is currently teaching at the Canadian University Dubai. 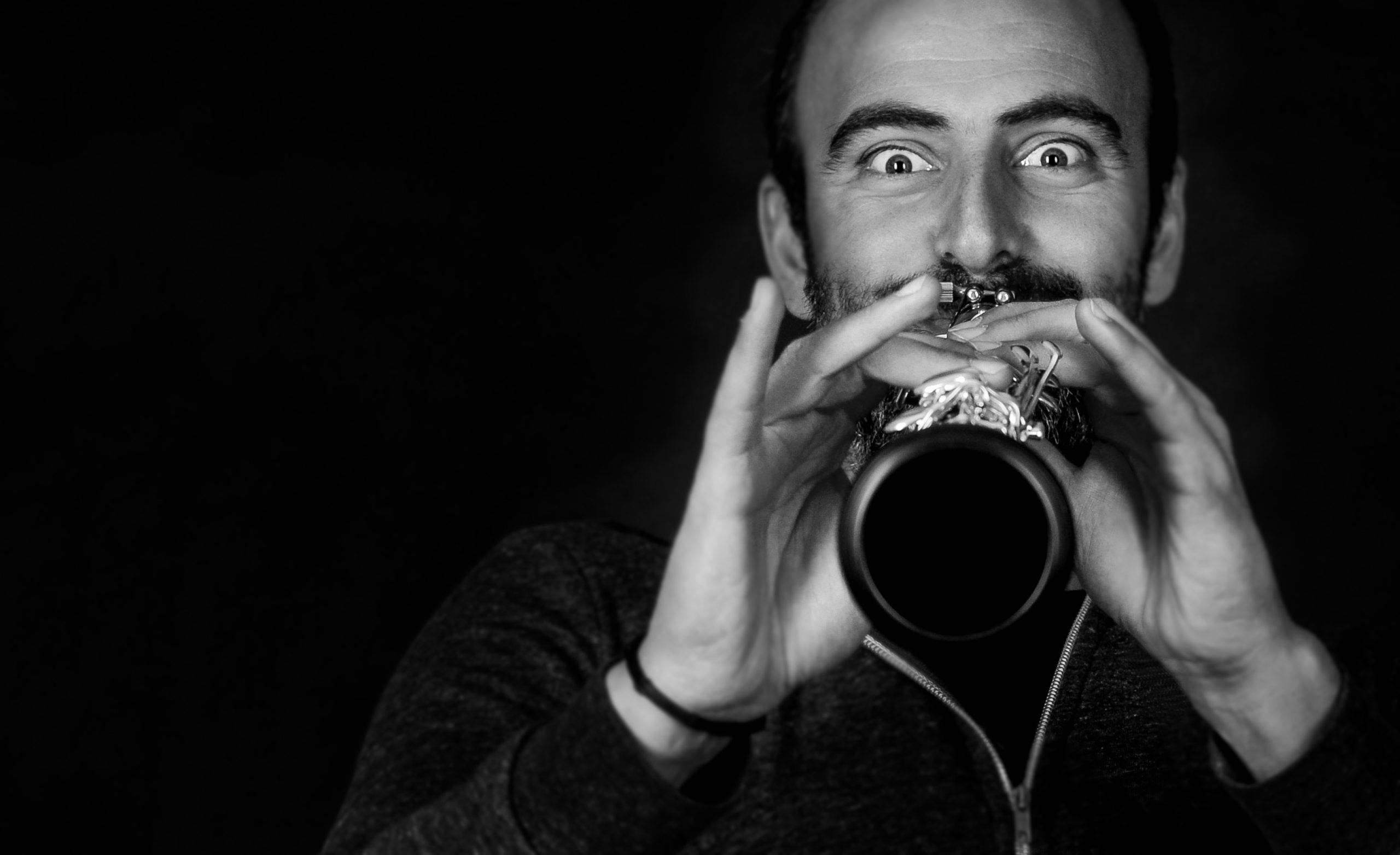 Hailed as “intensely soulful” and a “virtuoso” by The New York Times, Winner of OpusKlassik award in 2019 clarinetist and composer Kinan Azmeh has gained international recognition for what the New Yorker has called “Spellbinding!” for his distinctive voice across diverse musical genres.

Originally from Damascus, Syria, Kinan Azmeh brings his music to all corners of the world as a soloist, composer and improviser. Notable appearances include the Opera Bastille, Paris; Tchaikovsky Grand Hall, Moscow; Carnegie Hall and the UN General Assembly, New York; the Royal Albert hall, London; Teatro Colon, Buenos Aires; Der Philharmonie, Berlin; the Library of Congress, the Kennedy Center, Washington DC; the Mozarteum, Salzburg, Hamburg’s Elbphilharmonie; and in his native Syria at the opening concert of the Damascus Opera House.

He has appeared as a soloist with the New York Philharmonic, the Seattle Symphony, the Bavarian Radio Orchestra, the Dusseldorf Symphony, the West-Eastern Divan Orchestra, the Qatar Philharmonic and the Syrian Symphony Orchestra among others, and has shared the stage with such musical luminaries as Yo-Yo Ma, Daniel Barenboim, Marcel Khalife, John McLaughlin, Francois Rabbath Aynur and Jivan Gasparian.

An advocate for new music, several concertos were dedicated to him by composers such as Kareem Roustom, Dia Succari, Dinuk Wijeratne, Zaid Jabri, Saad Haddad and Guss Janssen, in addition to a large number of chamber music works.

In addition to his own Arab-Jazz Quartet CityBnad and his Hewar trio, he has also been playing with the Silkroad Ensemble since 2012, whose 2017 Grammy Award-winning album “Sing Me Home” features Kinan as a clarinetist and composer.

Kinan Azmeh is a graduate of New York’s Juilliard School as a student of Charles Neidich, and of both the Damascus High institute of Music where he studied with Shukry Sahwki, Nicolay Viovanof and Anatoly Moratof, and Damascus University’s School of Electrical Engineering. Kinan earned his doctorate degree in music from the City University of New York in 2013.

His first opera “Songs for Days to Come” which is fully sung in Arabic, was recently premiered in Osnabruck, Germany in June 2022 to a great acclaim and He has recently been appointed to the National Council for the Arts on a nomination by President Joe Biden. 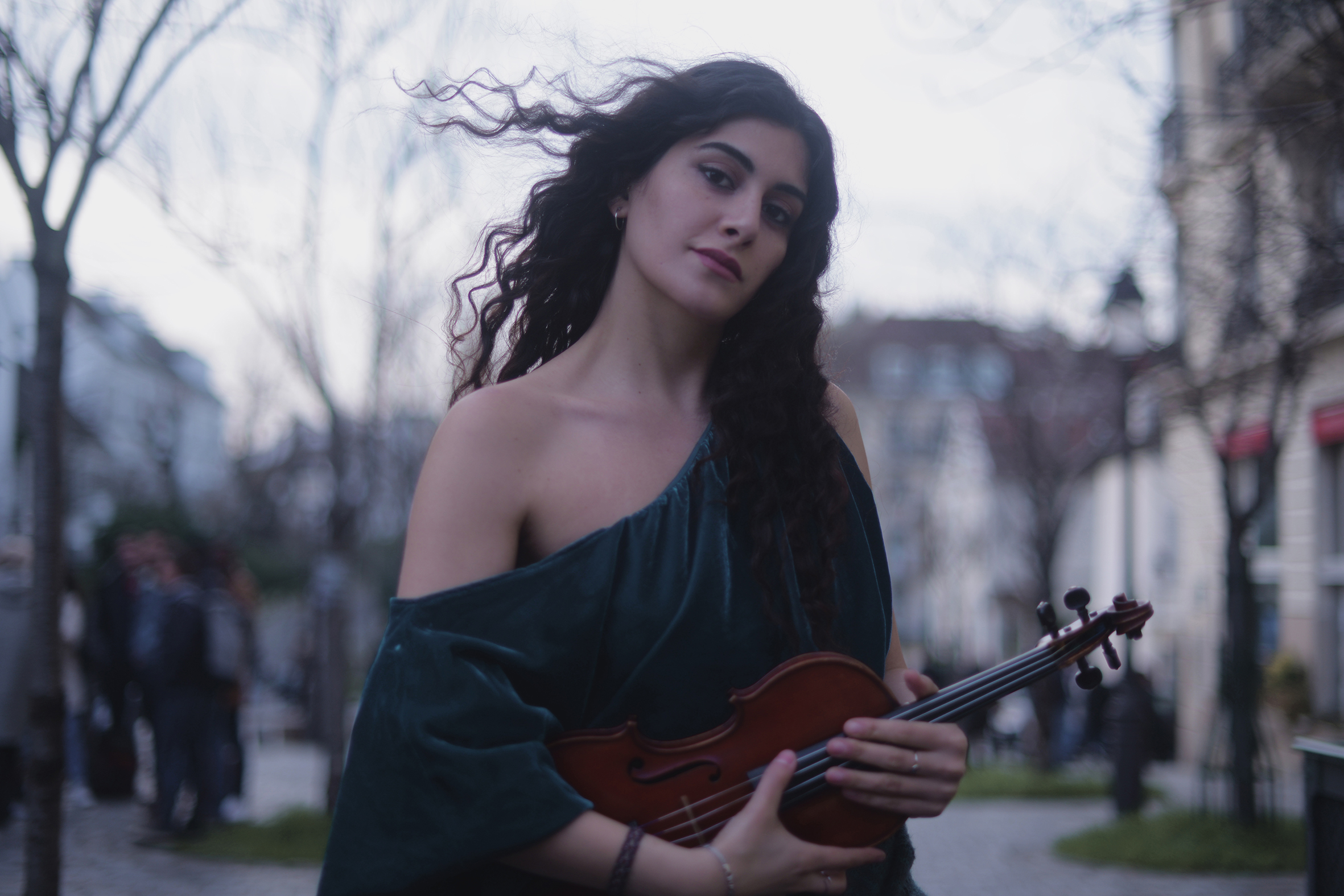 Deemed a “Rising Star” by BBC Music Magazine, violinist and composer Layale Chaker was raised on the verge of several musical streams since her childhood. She debuted her musical training at the National Higher Conservatory of Beirut in her native Lebanon, and later went on to pursue her studies at Conservatoire Regional de Paris and the Royal Academy of Music in London, studying under professors such as Mohamed Hashem, Carmen Scripcariu, Jeanne-Marie Conquer and Nicholas Miller.

This season has seen her complete a year-long residency at the radio WQXR, where she premiered a new work with her chamber jazz quintet ; a recording with string quartet ETHEL, to be released in 2023 ; and a first public reading of “Ruinous Gods”, her debut opera in collaboration with Lisa Schlesinger. She is also due to premiere a new work for violin and choir at Morgenland Festival Osnabruck (Germany) with the choral ensemble Capella Amsterdam.

Her debut album with her ensemble Sarafand, “Inner Rhyme”, recipient of the AFAC 2018 fund, is dedicated to the sounds, rhythms, rhymes, shapes and forms of Arabic poetry. The album was released on In a Circle Records, and listed as “Top of The World” by Songlines with a 5-star review, rated #2 on NPR 10 Best Releases, #1 for several weeks on the World Charts of iTunes and Amazon Music, and has received praises by the BBC Music Magazine, The New York Times, The Strad, Strings Magazine, Jazz World among others.

A 2020-2022 Jerome Hill Fellow and winner of the Silkroad Seeds inaugural 2020 award, Layale is also recipient of the Opera America Dicovery 2022 award, a Nadia et Lili Boulanger 2019 laureate, finalist of the Rolex Mentor & Protege 2018 Prize, the recipient of the Diaphonique Franco-British Commission Prize 2019, the 2018 Arab Fund for Arts and Culture Grant, the Royal Academy of Music 2018 Guinness Award, and the winner of the Ruth Anderson 2017 Competition.